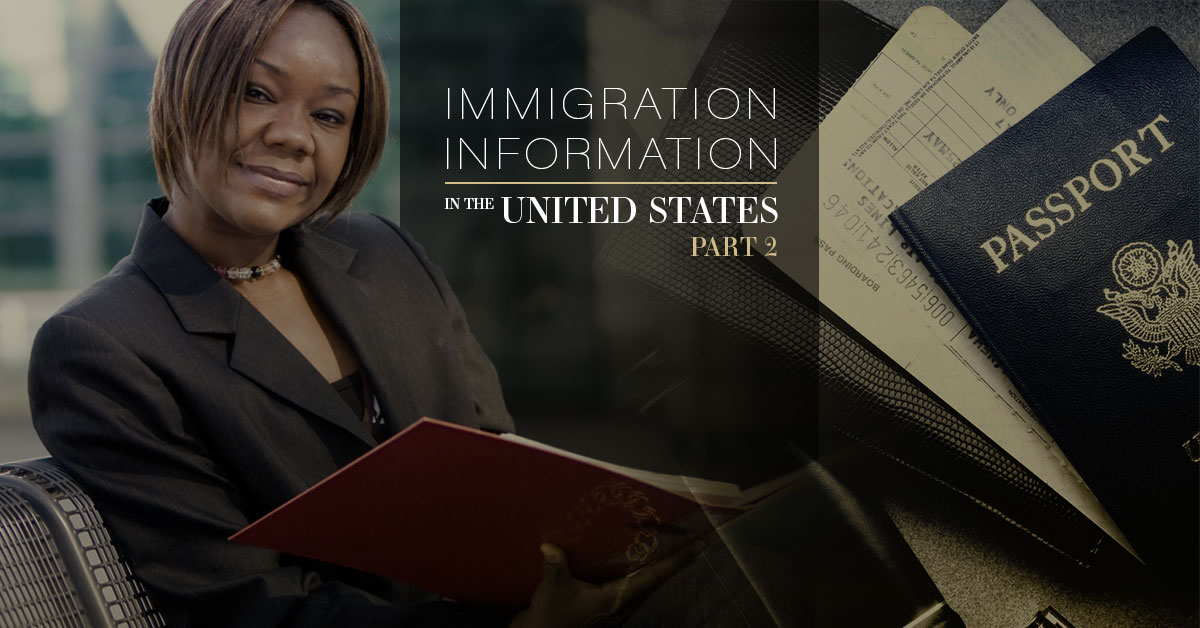 An Overview of Immigration Information in the United States - Part Two

Immigration in the United States is a very hot topic right now. You’ve probably seen the protests due to the current bans on some countries in the Middle East. You’ve probably seen the many hardworking people at the airports trying to bring back in citizens who are a part of this country, but are not allowed in because of their religion and where they come from. If you’re familiar with history or you’re old enough to see what’s happening to our country to know that it’s happened before, then you’re probably feeling afraid if you are even the slightest bit different. It’s a difficult time to be an immigrant, which is why at Zohar Law PLLC we strive to help you by offering as much immigration information as possible. In our last blog, we went over An Overview Of Immigration Information In The United States – Part One, which detailed three points of immigration to consider if you are an immigrant. If you are an immigrant who is in need of information or help, then we can be the law firm you depend on for all of your immigration needs.

In today’s blog, we’ll be going over the immigration system and lawful entry. Since immigration is so detailed, we wanted to break up an overview of immigration so we could get as detailed and provide you with as much immigration information as possible. If you’re interested in learning about specific visas we can help you obtain, check out our services. In some of our past blogs, we’ve gone over deportation and what you need to know, questions to ask a lawyer, and went into specifics about the Violence Against Women Act and the Special Immigrant Juvenile Status. If you’re interested in learning more about immigration information, continue reading our blogs or stop into our office and talk to an immigration lawyer.

The immigration system in America is pretty complex. There are many different types of visas and ways to obtain citizenship; however, as we’re seeing in America at this time, it can be scary being an immigrant because even if you have citizenship it’s not a guarantee you’re allowed back into the country. By the way, this is illegal and if you’re staying up to date in current events, many people are fighting against the Muslim Ban and trying to get people who are citizens back into the country.

The immigration system is run by a body of government that is in charge of the current immigration policy this is called the Immigration and Naturalization Act. The INA helps with lawful entry – which you’ll read about below – and grants visas for people all over the United States. However, in terms of the recent refugee situation, the President and Congress have to determine how many refugees are allowed into the country.

When you immigrate to America it is based on a few main points. The first being reuniting families, admitting immigrants with skills to increase the United States economy, protecting refugees, and increasing the diversity in the country. Employment based immigration is a very important factor to moving to the United States. There are many different types of visas to get for both family reunification and employment. For instance, if you have family in the United States you can apply for a sponsorship. If you want to work in the United States, you can apply for a permanent based visa such as a R-1 visa, L-1 visas, or H visas depending on what kind of work you do. Keep in mind that the INA has put a limit on the amount of immigrants allowed into the United States from one country. That number cannot exceed seven percent no matter what.